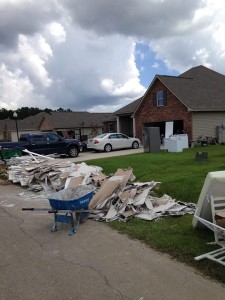 My heart is heavy for Louisiana residents invaded by floodwaters, many still fighting the deluge, water still deep in homes.

But for the bravery and love of the people in South Louisiana we would perish from the earth. Have you seen the heroic video of David Phung and his buddies as they were riding in a duck boat, and they came upon a woman in her little red car, the waters drowning the convertible, the car sinking?

They risked their lives, saved both woman and her dog.

Believe me when I say America is already great. We don’t need to be made great again, all presidential slogans aside.

My house in Ponchatoula is as dry as driftwood on a sunny beach. Yet I have compassion for my Louisiana brothers and sisters. Who expected such a Noahic flood without a hurricane? I sure didn’t.

Governor John Bel Edwards has been on top of this and other crises since he started work on January 11. He’s had a hard row to hoe, but he’s up to it. Even the Louisiana Governor’s Mansion flooded. Only in Louisiana.

He’s doing his part, and so should we. Not everyone can steer a duck boat to fish people and pets out of the water. Thankfully, there were people who could and did.

For the rest of us, ripping out sheetrock and cleaning houses might be the best we can do. That needs to be done. Others of us may only be able to bring lunch to a work crew, and that’s important. Some folks unable to help otherwise can give money.

I’ve done demolitions, brought food to workers, and gave money. Likewise, I’ve tried to use my communication skills and influence to advocate for those in need. Nothing I’ve done was anywhere close to risking life and limb in water rescues.

But beware of the scammers when donating money. The frauds are not just unscrupulous contractors preying on the innocent. Instead, there are fake charities carrying out scams to separate the kindhearted from their cold cash.

A good place to give locally is the Southeastern Louisiana University Disaster Relief Fund, which will help students in need. Some 7,000 students at Southeastern live in the area hit by flooding. That’s half the student body. I gave to the fund, and I hope you, too, will consider helping students in need. Click here to give.

We will pull through this difficult time if we put people first. Just giving a cup of cold water to a person in need is the main mission of caring. Everything else is lagniappe.