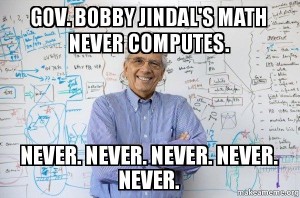 “Figures don’t lie, but liars figure” – attributed to Mark Twain (and others)

Every day we are bombarded with numbers about our state and its finances. We are told one day there is a $1.6 billion structural deficit in Louisiana’s budget. A few days later, we are led to believe it is all but fixed – just a little tweaking and fiscal legerdemain at the end and we will be okay – for a little while, at least long enough for the governor to move on.

Gov. Bobby Jindal tells us the number of state employees has been reduced by more than 30,000, but we are not told how many of them (the vast bulk) are still being paid by the state via contracts with private companies. Not only that, we can’t find documentation among civil service or other official records to substantiate the 30,000 number itself. The governor also claims to have reduced the budget by 26 percent, but we can’t figure out how he came to that percentage either.

Then, we look at the governor’s own executive budgets and see financial statements clearly showing operating budget deficits in two of the three first years of the Jindal administration (and as recently as FY 2013-2014 – the last year the audited total is reported – when a subtle format change enabled use of the undesignated general fund balance to show a positive bottom line – more on this shortly).

We even read conflicting reports of the size of the budget. The state General Fund, on which the most focus was placed before we started “sweeping” dedicated funds, is one number. Total state funding from all sources is another, the total budget including federal funds is another and spending, including double-counts resulting from interagency transfers by individual departments, is yet another. All these numbers get reported at different times by different sources.

So, are we being lied to, or is that too strong a term? One thing is for sure – finding clear, consistent and unambiguous data about state finances is next to impossible.

Over a quarter of a century ago, state leaders agreed there was a need for one set of numbers upon which everybody could agree for things like how much revenue we could expect, how much spending could be expected to grow based on trend data, how many state employees there were, etc., etc.

After all, everybody was entitled to his or her own opinions, but there should be but one set of facts, right? Right, but has this become a reality? Obviously not.

Let’s take just one example of what I am talking about here – the Blanco surplus and what happened to it during the Jindal administration. Examining this one issue requires me to bombard you with even more numbers, but I hope you will see why this is necessary to make my point.

Many consider the best measure of the surplus for a given year the Undesignated Unreserved General Fund Balance shown on the balance sheet of governmental funds contained in the Comprehensive Annual Financial Report (CAFR) prepared by the Division of Administration in accordance with Governmental Accounting Standards Board rules and audited by the legislative auditor.

This number reflects how much money was available in the general fund in a given year, how much we spent or firmly obligated, and how much was left. But, as we will see, using this source is problematic, particularly since recent practice has been to use dedicated funds as if they weren’t and the CAFR reporting format has changed.

So, how much of a surplus did Blanco leave Jindal? It apparently depends on where you look, when you look, and how you define “surplus.” For lack of a better source, I would, for now, choose the actual column of the Comparative Statements in the Executive Budget documents. But, because budgets cross one year of administrations, it may be hard to come up with a definite answer from any source.

What happened to the surplus?

That analysis, and the fact the Jindal administration raided every fund it could to “balance” the budget in recent years tells me it got spent.

It would appear most of it was spent on capital outlay projects (the statement for FY 2008-2009 shows a reservation of $782 million for FY 2009-2010 capital outlay appropriations). This is a good use, so let’s hope that’s where it went. But, if so, why would anybody want to deny the surplus was used in the budget, much less that it ever existed in the first place?

If you find all of this confusing, join the club – it’s a big one. Does it have to be this way? No. We, all of us, could demand a governor back up his statements with hard evidence. We could ask questions like this of his budget people, “When was the last time our budget was really balanced, and what can you show me to prove it?”

Somebody knows exactly how many employees no longer show up on the state’s payroll but were shifted to private sector jobs paid for through state contracts. Even if you don’t care about that, wouldn’t you like to see hard evidence of how many people actually work for the state? Believe it, or not, that would seem to be currently impossible

There are a lot of good data out there. Look at the publications of the Legislative Fiscal Office and the House and Senate fiscal staffs for proof. These folks are providing a lot of excellent information right now that is being ignored by most of the very people they work for, along with the mainstream media.

Go to their websites and see for yourself. You might be amazed at the amount of understandable fiscal information you find there. But our legislators and the press take the easy way out – they accept far too many ad hoc statements from almost anybody as fact without questioning that person about the basis of the assertion. As a result, we are all done a great disservice.

A WARNING TO OUR NEXT GOVERNOR: You are walking into a fiscal nightmare. Find some good people. Consider the staffs of the legislative agencies above and look closely for career employees currently working at the Division of Administration and elsewhere who are competent, brave, and have the inside knowledge you desperately need.

DO NOT LOOK ENTIRELY FOR SYCOPHANTS WHO WILL PUT NUMBERS TOGETHER TO PLEASE YOU.

You certainly need moral support for your positions, but you have a greater need for people who will tell you the truth. By retaining them, you, and we all, will be well served.

Dayne Sherman is the author of the novels Zion and Welcome to the Fallen Paradise, $2.99 ebooks. His Hurricane Katrina-related short story “One More Disaster” is free on June 5-6, 2015. Signed first editions available from the author. And he does not speak for any of his employers.